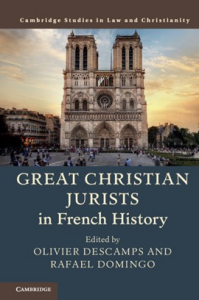 French legal culture, from the Middle Ages to the present day, has had an impressive inﬂuence on legal norms and institutions that have emerged in Europe and the Americas, as well as in Asian and African countries. This volume examines the lives of twenty-seven key legal thinkers in French history, with a focus on how their Christian faith and ideals were a factor in framing the evolution of French jurisprudence. Professors Olivier Descamps and Rafael Domingo bring together this diverse group of distinguished legal scholars and historians to provide a unique comparative study of law and religion that will be of value to scholars, lawyers, and students. The collaboration among French and non-French scholars, and the diversity of international and methodological perspectives, gives this volume its own unique character and value to add to this fascinating series. Christian Hattenhauer, Professor for Civil Law and the History of Law at the University of Heidelberg and member of the FIIT, participated in this project and contributed a study on Hugues Doneau (1527–1591).