The Impact of Religion on Character Formation

The Impact of Religion on Character Formation, Ethical Education and the Communication of Values in Late Modern Pluralistic Societies 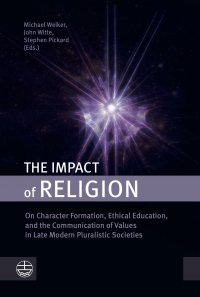 Late modern pluralistic societies are characterised by an infinitely multi-coloured individuality of their citizens and a wealth of associations and groups. This „plurality“, which is difficult to grasp, is welcomed by many people as a source of freedom, but feared by some people inside and many observers outside as a social chaos. However, this plurality is countered by a limited number of so-called „social systems“, which are to a large extent characterised by organisational, institutional and normative structures and weight.

This book on the influence of religion on the ethos of pluralistic societies is part of a series of ten international research projects with contributions from all continents. The influences of the market, law, science, politics, media, family, education, medicine and defense will also be examined.

The overwhelming majority of the contributions in this volume deal with the Christian religion, as pluralistic societies today thrive substantially in Christian environments.